On Which Side Of The Road Do Your Flowers Grow? 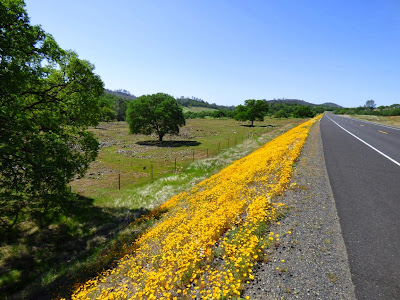 Sometimes a book just kind of falls into your lap that quite simply steals your heart. Such is the case with the book: "On Which Side Of The Road Do The Flowers Grow?" by Wendell E. Mettey. The author is a minister who has compiled a collection of stories about some very special members of his church who came into his life with a special gift to give that even they didn't know they had. The title of the book refers to a story he tells at the beginning of the book that sets up all of the essays to follow. I will paraphrase the story here:

There was once a servant who was given the job of water carrier by his master. The job entailed carrying the water jugs to the village each day, filling them at the well, and carrying them back. The servant thought that the master had made a mistake as this was the lowest job in the house and the servant was too smart and resourceful for such a lowly task. Every day as he went back and forth to the village for water, he grumbled and complained. He didn't even spend a few moments talking and exchanging pleasantries with the women who gathered at the well every day. He was convinced that his master had made a mistake and that he deserved better.
One day as he was walking into the village he was struck by this thought: what if it wasn't the job that was the problem but the servant himself? What if he decided to not only do his job without complaint, but to become the very best water carrier that his master, or anyone else for that matter, had ever seen? He decided then and there to do just that. He started by carving a yoke from which to hang his water jugs. That way he could carry two at one time, one at each end, and carry even more water than before.
From that moment on, he became a better servant, and a better man, than anyone in the village had ever known. Not only did he treat his job with respect and mindfulness, but he took the time every day to stop and speak with the women at the well and travelers he met on the road. He would listen to their problems and concerns, and give them his advice and blessings. He soon became a blessing to the entire village.
When the time came for him to pass, the entire village came to pay their respects. They even went into the shed where he kept his precious jugs, thinking to do his job for him. They were surprised to see that along with the new, well kept jugs were jugs with cracks in them. One good jug was tied to one end of the yoke, and one with cracks were tied to the other. When the townspeople asked him why he carried cracked jugs and wasted so much water, he told them that when they returned to the village, they should look to see which side of the road the flowers grew on. Indeed, one side of the road from his master's house all the way to the village was a bounty of beautiful flowers. His cracked jug had grown beauty for everyone to enjoy as they made their way up and down the road.

The moral of the story, of course, is that we do not need to be perfect because it is from our imperfections that beauty is born. And so the rest of Rev. Mettey's book is filled with stories of imperfect people, some of them with many, many cracks, that watered the spirits of all who came in contact with them.

Perfection is the realm of The Creator. Just look at a flower. For the rest of us, we just have to do the very best we can with the cracks we have and know that it is through the cracks that we water the flowers of not only our lives but the lives of everyone around us. We just need to listen, learn, and then water where needed.