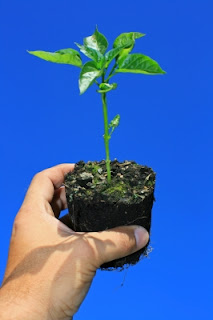 “Though I do not believe that a plant will spring up where no seed has
been, I have great faith in a seed. Convince me that you have a seed
there, and I am prepared to expect wonders.”

Even though I thought I had deleted my name from all those gardening magazine and catalog mailing lists (now that I no longer garden outside as I used to it seemed a waste of money and paper), a few still seem to be floating around out there. One of them sent me a gift as a way of enticing me back into the fold. It was a small packet of seeds for a new, fancy type of parsley I'd never heard of before. It was a nice surprise, but I doubt that I will be using them. When it comes to parsley, the traditional Italian parsley is the one I use. It's what my mother used, and it's what I use. For some of us older folks, change doesn't happen easily.

What is it about older folks and change anyway? Some people would rather hold on to old ways and ideas with a death grip rather than try something new, or do something in a different way. Is it that they think it means they were wrong all this time? Does it demean them or invalidate them in some way? I think the idea of change scares most people, the old, universal "fear of the unknown." Personally, I usually don't mind trying something different, or looking at things from a different perspective. I certainly don't want to wind up 80 or 90 years old having lived the same year over and over 80 or 90 times! I want to be exposed to new ideas, new ways of seeing the world. That's what keeps life fresh and exciting. Besides, as the philosophers and spiritual teachers tell us, nothing in this world really stays the same. Everything changes, every minute of every day.

So I'm going to take my cue from my dearest and oldest mentor, Henry David Thoreau, and plant a new seed where nothing was planted before and expect wonders. Maybe, after all, trying a new type of parsley will open up new ways of cooking new kinds of foods, and wouldn't that be a delightful culinary adventure?

Posted by Flower Bear's Garden at 9:23 AM No comments: