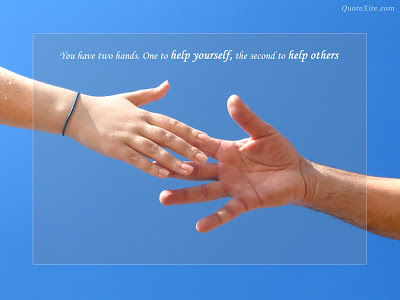 No, I'm not writing to ask for anything else this week. Well, at least not anything for myself. This time (and it's the last time, I promise), I'm asking you to take a special present to a very special man. No, I don't know his name but, hey, you're Santa! You know everything. I want you to find him and give him something very special for being such a kind person. Let me explain.

I was out Christmas shopping with my BFF the other day and after a while we stopped at a place called Old World Deli to grab a "little something" to hold us over after a strenuous morning shopping the sales. Now, as a rule, I don't carry a lot of cash on me these days, especially when I'm going to be traveling on crowded city buses and shopping in crowded stores. It's just a practice I grew up with in New York City. These days especially I use plastic. It's just easier. I keep a few dollar bills for bus fare and pay for everything else with my card. Anyway, I decided that what I deserved after a morning of shopping was a cup of coffee and one of their decadent fudge brownies. As I approached the cashier and pulled out my card, I saw a sign on the register that said: "There is a $5 minimum for card purchases." My total was $3.86. "Oh," I told the cashier. "I didn't see that. I'm not sure I have enough change on me. Let me check and if not, I'll just go back and get another brownie to take home for later." Just then a very well dressed business man standing next to me whipped out his wallet and said, "Never mind, I've got it." And with that he paid my bill.

Now, I have a confession to make, Santa. My first reaction to this man's kindness was not gratitude. It was shame. I felt as if he thought I couldn't afford to pay for my food. I know, that's an old established belief installed by my parents who thought taking charity was a sign of poverty. I blurted out that I simply don't carry much cash with me (like he needed to know that). He smiled and said, "well, luckily I do so don't worry about it. It's all taken care of." At that moment I could hear my spirit telling me that it was not about me, it was about his pleasure at being able to do something kind for someone else. So I smiled in return and said, "Well, thank you very much. That is very kind of you. I will make sure to pass it on to someone else. Merry Christmas." He bobbed his head in embarrassment at my praise and mumbled "Merry Christmas," in return.

So you see, Santa, I just want you to find this man and give him something very special in his stocking. Maybe a gift card to Old World Deli, or a coupon for a free coffee. Just something to let him know that his kindness did more than just pay for my coffee and brownie. It taught me a lesson in receiving with grace instead of denying him, as well as myself, the joy of giving and receiving. And I want to thank you, Santa, for being the symbol of what giving and receiving is truly all about, that it comes from a place of love for our fellow man - and woman - and for a kinder, gentler world.

That's all for now. I'm going to pull on my hat, scarf and gloves for one last round of shopping before your big day. I'm going on foot this time to work off that brownie. I'll be sure to leave some extra cookies out for you this year. And, hey, Thanks!

Merry Christmas one and all.
And so it is.